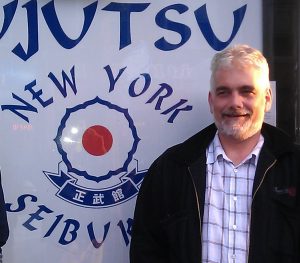 Peter Williams Sensei has been practising martial arts since the age of 7, starting with Jūdō under Pat Harrington Sensei. He played Jūdō for most of his primary and high school years, before taking a break while he finished his schooling. During this period he competed in Tae Kwon Do (Chung Do Kwan Tae Kwon Do, under 9th Dan Chun Suk Suh), reaching national level competition in 1983.

Peter returned to Sosuishi-ryu Australia in 1984 and studied Jūdō, Karate and Jujutsu simultaneously alongside Tae Kwon Do, before giving away Tae Kwon Do in order to focus on his study of the traditional Japanese martial arts.

He has been teaching continuously at the Epping Dōjō, Sydney NSW since 1984. This dōjō was originally started by Pat Harrington and Betty Huxley Sensei in 1969, with its direction falling to a progression of instructors until 1987. Peter has been the head instructor and dōjō manager at Epping since 1987 when it was passed on to him.

Peter was previously part of the Karo (leadership council) of Sosuishi-ryu Australia. He was made a director in 2014. Peter left Lotus Dojos Australia in March 2017, establishing Kumataka Dōjōs with Thomas Crooks.

Appointed by Shitama Manzo Dai Shihan, he and Thomas are the Directors of the Sōsuishi-ryū Jujutsu Kai Australia (SJJK-AUS). Peter holds the teaching teaching title of Kyōshi in Sōsuishi-ryū Jujutsu, conferred by Shitama Sensei.  He is a member of the Sekiryūkan Sei Kaiin, holding full membership within the Shadanhōjin Sekiryūkan Dōjō in Fukuoka. He holds an NCAS Level 1 Judo Coaching certification with Judo Australia.